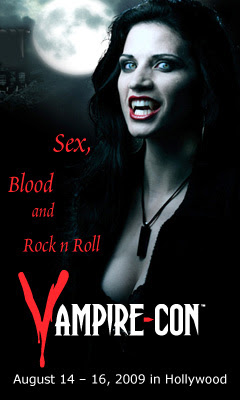 If you're lucky enough to be within reach of Hollywood this weekend, get yourself to Vampire-Con, the debut of "the world's first convention devoted exclusively to Vam-Pop culture." There's going to be a film festival (The Lost Boys, The Hunger, The Velvet Vampire, Count Yorga- Vampire, and a sneak preview of Midnight Son), celebrity panel discussions (including True Blood, Twilight, and Inked in Blood: 40 Years of Vampirella), a costume parade, contests, and Vampirella's Ball. Creatures of the night are gleefully invited to attend. In association with, among others, the American Red Cross (no, really).

Click here for more info and to order tickets.
Posted by Aspasia B at 3:49 PM