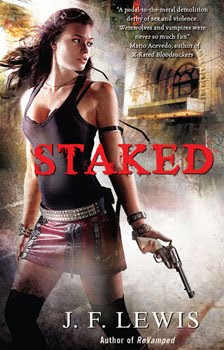 Scanning the book rack at my friendly neighbourhood drugstore, I stumbled across Staked by J.F. Lewis. I hadn't been planning on getting another book (my 'to review' list is already longer than the tweenybopper sign-up sheet for the Edward fan club), but how could I resist a book with a cover blurb that describes it as "A pedal-to-the-metal demolition derby of sex and violence"? Exactly.

Okay, so I don't know about demolition derby but Staked wastes no time getting down to violence. Starting with a decapitation and followed right behind by a nasty brawl with a werewolf, the reader gets thrown right into the world of Void City. Centred around Eric, a strip club owner and "Vlad" vampire (named for their ability, like Dracula, to repeatedly regenerate where most vamps would be killed), his memory blackouts are among a host of problems he has to deal with, including demanding girlfriends (and strippers), a crappy sense of time (sunrise is when?), lost love, magic gone awry, betrayals, vengeful fanatical werewolves, and an undead daughter with serious issues.

While Eric tries to put together all the pieces and figure out who's out to get him and why, his newly turned girlfriend Tabitha gets used to her undead existence, as well as spending a whole lot of time trying to figure out how to keep Eric from leaving her. While the chapters focusing on Eric are okay, fairly interesting and move the plot along, the chapters about Tabitha probably should have been left out altogether. They're overwhelmingly boring and pointless (other than as an excuse for way too much exposition), and also leave me wondering if the author got stuck in a time warp. Not only is the female vampire (Tabitha) an emotional mess (her vampirism is likened more than once to PMS), but despite being an incredibly powerful Vlad, her first thought when she leaves Eric is to go to another man who she believes will take care of her. Really? That's the strong personality that made her a Vlad and not a drone?

She also gets into a catfight, promises to let Eric have sex with other (living) women as long as he stays with her, and suddenly wants children even though she never wanted them before (but now she can't have them...cue the teary realization). And did I mention she takes the time to go shopping when Eric is in the middle of a crisis and could probably use some help? She needs to buy sexy new lingerie for his birthday, don'cha know! Forget about feminism, how about a little realism with the female characters?

As for the sex part of our demolition derby, I hate to say it but it was disappointing. Boring and occasionally creepy, it mostly felt like it was just thrown in for the sake of getting a "nudity and adult situations" rating. Unfortunately, Staked too often seems thrown together, like a badly stitched patchwork of unrelated scenes and plot points.

But maybe I should be more forgiving seeing as how this is Mr. Lewis's first novel. Despite its various flaws (such as all the repetition, which could be due to Eric's memory loss but I suspect is due more to poor editing), Staked has its merits as well. Lewis put some thought into the setting when he created Void City, where magic hides the supernatural from the "norms" (a vampire attack might be perceived as a mugging), and the police answer to a high-level vamp. His mythology is also detailed and believable, and would have been a great framework to play within if he didn't cancel it out by making both main characters the rarest of the rare vamps, able to overcome their vampire natures/attributes and avoid all those darn inconveniences (you know, the ones that make them what they are in the first place).

It is hard to be forgiving, however, when, on top of everything else, the characters are so incredibly dumb. I don't think I'm the only one who finds it beyond annoying when characters lack the cognitive skills to put 2 and 2 together. It kind of takes the fun out of reading when you figure out what's going on in the first ten pages and the characters then spend the next 390 pages doing everything but clueing in. It's even worse when they finally figure out "4" and still act like they have no idea what's going on.

Eric ultimately does work out who's been playing him. He even gets some revenge. Although his attitude about the whole thing is bizarre and somewhat illogical. And then there's a huge cliffhanger to contend with, to be continued in the next book, ReVamped (which, judging by the excerpt I read, is more of the same). Staked isn't horrible; it's entertaining and there are some neat ideas presented, but don't expect the next great vampire classic--and don't start reading Staked unless you're ready to make a longterm, multi-book commitment. Consider yourself warned.

Vampire Types: Drones/Serfs, Soldiers/Knights, Masters/Barons, Vlads/Kings (or Queens), Emperors (extremely rare). Each type has its own characteristics and a vampire becomes one or the other based on the strength of their personality, as well as the trauma of their transformation. Drones are the easiest to kill, Vlads are nearly impossible to permanently destroy (you need to find the one specific way that will do it).

Appearance/Physical Characteristics: Generally human, but not all traits are universal. Some suffer from "corpse sweat" (smells like a mixture of gasoline and urine). Eye colour fades over time. Fangs "pop" out at will. All bodily fluids have been replaced by blood. No body heat, so they're always cold unless they've just fed. No reflection. Don't/can't eat food. These vampires are basically animated corpses.

Powers: Super strength, super speed, shapeshifting (including to non-corporeal forms like mist or a virus), can sense other vampires and trace the ones they've created, quick healing

Weaknesses: Sunlight, holy objects (anything blessed, not just crosses or holy water), stakes (kill some vamps, incapacitate others), loss of self-control if they get too hungry, the more powerful the vamp the more "quirks" they suffer, victims sometimes come back as ghosts

Mythology: Takes an act of will, not just an exchange of blood to sire a vampire. The transformation process is painful and traumatic (and disgusting--the body empties itself out, as is described in unpleasant detail). Vampires are all different, with their own strengths and weaknesses; some can easily shapeshift, some can't; some heal easily from all wounds, some need to take extra steps (like getting their sire's blood) to heal from certain wounds. An extreme minority of vampires (including Tabitha) can makes themselves human again (with a reflection, beating heart, and all other attributes of the living). Eric is something completely unique: he can go "uber-vamp" with black skin, purple eyes, and wings. He can also command bats in this form and is apparently indestructible. There are also rites that can be performed to raise a vampire to the next level (e.g. from soldier to master). A human who is killed by a vampire can come back as a mindless, zombie-like blood-drinker unless they are decapitated.

(Good) Eric: Bones had broken when he landed. Some of them sounded important.

Staked by J.F. Lewis. Published by Simon and Schuster. Also available as an e-book.
Posted by Aspasia B at 9:32 AM