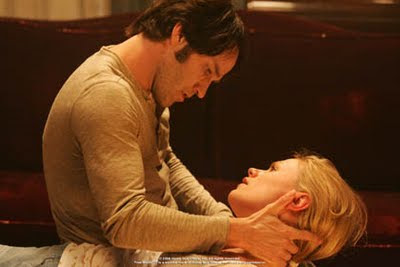 According to my darling SO, my review of the last episode included too much synopsis and not enough analysis. I'm not sure I entirely agree, but since he can do an eerily accurate impression of vampire Bill, I think I'll have to give in on this one.

But I still feel the need to offer at least a brief synopsis, so here goes: Knowing he can't fight all three of the vampires threatening Sookie, Bill forces them to back off by claiming Sookie is his, thereby making her off-limits to the rest of them. After the other vamps (Malcolm, Diane and Liam) finally leave, Sookie is understandably freaked and upset. Bill obviously already cares deeply for her, and his frustration over her fear shows. He leaves to confront the other vampires, telling them to stay away from him and Sookie. When informed he has no authority over them he responds that there are higher authorities: "Eric" and her. Malcolm et al don't seem overly concerned; before he leaves, Bill warns them that their behaviour will have consequences. Sookie, meanwhile, isn't letting her fear get in the way of a good fantasy. There's no question she wants Bill even as her head tells her to stay away. Ironically, the reason she fears him is the same reason she likes being around him: she can't hear his thoughts.

While all this is going on, Tara and Sam--exhibiting some pretty decent chemistry of their own--decide to hook up ("one time only") to alleviate some of their loneliness. Staying out all night leads to a violent confrontation between Tara and her sloppy drunk mom, causing Tara to take off.

When Dawn returns home after her shift at Merlotte's, she finds the bed she left Jason tied to is now empty. Confused, she's suddenly grabbed from behind by a masked intruder claiming to be the vampire she previously hooked up with. Her reaction is a combination of terror and lust, which is arguably the chief appeal of vampires. In this case, the "vampire" turns out to be Jason, and her initial annoyance quickly turns to a round of energetic action. Unfortunately, it comes to an abrupt halt when Jason hallucinates that the vampire from Maudette's tape (Liam) has replaced Dawn. They end up arguing and Dawn chases Jason out of her house with a loaded gun. Pissed off and sick of vampires, Jason overreacts and goes to Lafayette (who deals on the side) looking for Viagra. Instead (and not quite believably) he decides to try V (vampire blood/V-juice) and is so desperate for it he'll even dance in his underwear for Lafayette's website (another side enterprise).

The next day Sam calls Sookie and asks her to stop by Dawn's place to wake her up because she's late for work. Sookie finds Dawn still in bed, but she won't be coming into work on account of coming down with a slight case of death. Sookie's confusion soon turns to disbelief soon erupts in an impressively succinct and expressive scream (props to Anna Paquin).

Okay, so maybe that wasn't the briefest synopsis ever, but there's a lot going on in every episode of this show (and isn't that, after all, why we love it?)

I've already complimented the acting, directing, music, and cinematography, so I guess it's time to mention the sets. The high standards exhibited throughout True Blood continue in this department. Someone has put a lot of thought into the sets; everything from Bill's gorgeous old house (love it) to Sam's trailer is detailed and memorable. No generic Pottery Barn lamps around here. If you just saw an interior shot with no other context it would still be obvious whose home you were looking at. Nicely done.

The mystery of whether Sam is actually Sookie's guardian dog takes a twist when the dog (or one that looks just like it) shows up as Sam is sitting on his steps. He greets the dog (calling it "my brother" in a friendly way) and plays with it. He also tells the dog he wishes Buffy or Blade would show up to get rid of Bill, which is a nice little nod to True Blood's predeccesors, as well as a cute moment. Tara also notices and comments to Lafayette that Sam growls and barks in his sleep.

There's another minor mystery when Sookie goes to Bill's house during the day, settling in on his front steps to work out some of her frustration, and we get a view of the nearby trees through her eyes. The colours are so intense they're practically glowing. Is that supposed to be a metaphor for her sexuality being unleashed? Is it continued side-effects of the V-juice she had? Or is it just the way Sookie normally views the world?

I also like the way magic is being brought into the mythos of the show. When Sookie confronts Bill about not being able to hear his thoughts he suggests it might be because he's dead. She refuses to accept that, snapping that he's up and moving around, and how does anything work inside him anyway. He claims that magic animates him, and explains:

You think that it's not magic that keeps you alive? Just 'cause you understand the mechanics of how something works doesn't make it any less of a miracle...which is just another word for magic. We're all kept alive by magic, Sookie. My magic's just a little different from yours, that's all.

Sookie might not be convinced but I am. It's as good an explanation as any for the existence of vampires and sets the show up for more magic. I'm looking forward to seeing where they go with it.

Thinking about this episode made me realize another way in which True Blood approaches the vampire genre with fresh eyes. Usually the fearful and mistrustful humans need to be convinced by the hero vampire (if there is one) that he (and it usually is a he) really is a good guy. In True Blood, however, Sookie starts out trusting, and even being excited about vampires. She's attracted to Bill right away and insists he's a person just like anyone else. It is her open-mindedness, not her mistrust, that is challenged--by evidence of reprehensible vampire acts, by the evil vamps she encounters, and even by Bill, who doesn't seem to be afraid to let her see his dark side as well as his more human qualities. Just to go back to Buffy for a second, I think Angel would have staked himself before he willingly and deliberately let Buffy see him drink a glass of blood, let alone directly from a human. Bill seems to accept it as being a part of himself, and expects Sookie to understand that as well. This, frankly, is brilliant. The point of True Blood isn't to label vampires as all good or all evil, but to show that they--like humans--are equally capable of good or evil acts. Accepting them means accepting their dark sides as well as the light, and judging them--if one insists on doing so--should be based on what they, like humans, choose to do (or not do). Good point.

On a side note, after my gleeful praise of the amazing chemistry between Bill and Sookie, I found out (accidentally, I might add) that Stephen Moyer and Anna Paquin have been dating long-term and are now engaged. Oops. I'm not one to actually care about celebrity activities, and I almost never want to know about the actors behind my favourite characters, so it's no real surprise to me that I was out of the loop on this. I don't know about anyone else, but this info detracts somewhat from my appreciation. Now the chemistry isn't due to great acting skills--Anna and Stephen are just expressing what they feel anyway. Still good chemistry, though.

Physical Characteristics: Hearts don't beat, no need to breathe, no electrical impulses. They are animated corpses.

Weaknesses: Stakes. Hep D, the only blood-borne illness to which vampires are susceptible (although it's relatively harmless to humans). Hep D weakens a vampire for about a month, leaving them vulnerable to being staked or otherwise killed. The older the vamp, the stronger; younger vampires are dismissed by their elders and pose no real threat or challenge to them.

Mythology and Vampire Culture: If a vampire claims a human as exclusively theirs, other vampires know to leave that human alone; otherwise, the human is considered fair game. Vampires who live in nests with other vamps become cruel and vicious, whereas vampires who are solitary are better able to retain their humanity.

Bill: Sookie is mine.

Tara: Can I ask you a personal question?
Sam: Hold on. [Takes a drink] All right.
Tara: Are you lonely?
Sam: Yes, I am. I am very lonely.

Bill: [seeing the drained body of Malcolm, Diane and Liam's human] Now, you all make me sick.
Diane: You used to be fun. This all on account of that little breather?
Bill: If you insist on flaunting your ways in front of mortals, there will be consequences.

True Blood, Season 1, Episode 2 "Mine." Written by Alan Ball and Charlaine Harris. Directed by John Dahl. From HBO.
Posted by Aspasia B at 9:01 AM