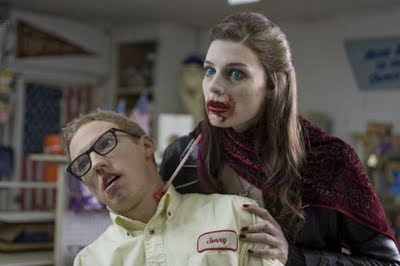 Just when you thought the Toronto International Film Festival was going to be all orphans and reincarnated communist revolutionaries, along comes a movie that's really going to suck. I mean that in the best way possible, of course.

Billed as a rock 'n' roll spoof, Suck is about a struggling rock band desperate for immortality and a record deal. Their wildest dreams start coming true when their bassist spends the night with the undead and returns with a makeover money can't buy. Soon the entire band is wallowing in fame (and infamy), living the dream. Until things start getting complicated, that is (including being stalked by legendary vampire hunter--and nyctophobic--Eddie Van Helsing).

Yeah, I thought so.