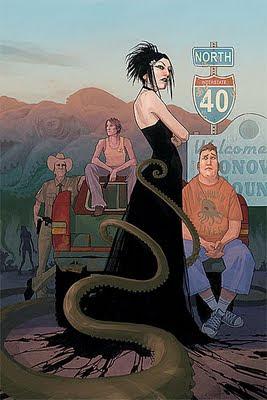 Although it's not strictly about vampires, I'm glad I finally got a chance to read and review North 40. For those of you unfamiliar, it's a Lovecraft-esque tale about ancient evil unleashed on a small Midwestern town. After a couple of bored teenagers unwittingly invoke said evil, the townspeople lose consciousness only to wake in a world of nightmares. Some have been turned into horrific creatures (a living dead girl obsessed with her boyfriend, a man with eyes covering his forehead), some have become mere fodder, and some (Sheriff Morgan--seemingly okay but possibly hearing voices; Wyatt--formerly bullied and now impervious to harm; and Amanda--armed with a scythe and being trained to fight the ultimate evil) have been given the means to fight the monsters that have invaded, and the even worse one that's on its way.

The story is well-written and well-paced. You get just enough to know what's going on, but not so much that you don't want more. You also get a good sense right away of who the characters are--but that could be because they don't stray too far from the stereotypical (the one real weakness with the introduction). At least they don't stay that way for long. I already found myself caring about them and what happens to them. Always a good sign.

The artwork is lovely--very expressive without being over the top (nice for those who like their horror with a minimum of gore). The colouring is soft and subdued, well-suited to the setting.

The vampire (or vampire-like) characters have already made their presence felt. The more classically vampiric character is a grey-skinned woman, with claws, fangs, wings, and bat features. Claiming to be burning with hunger, the story breaks with tradition here as she doesn't seem to be similarly burning from the sun. She also can apparently be killed with a regular bullet, but it isn't clear yet if she's actually dead. Hope to see her again (or another similar character).

The other vampiric character is a man with an unnaturally gaping mouth (think 30 Days of Night) full of pointed teeth, and a taste for flesh along with his blood. His fate was left unclear so we may be seeing him again as well (and hopefully learning more about him).

Overall, Issue #1 is a good start to what seems to be a promising series. Definitely looking forward to reading more.

North 40 #1; art by Fiona Staples, written by Aaron Williams. From DC Comics/WildStorm.
Posted by Aspasia B at 5:54 PM